The Forger’s Forgery is a mystery which opens in Amsterdam, where visiting professor Henry Lindon enters a very different world from that of his prior employment at Southerland University in Dallas.

Here, he navigates Dutch culture, history, and a new university environment that embraces blossoming romantic possibilities, a missing painting, and a Southern University coed’s murder—along with a changing relationship with his wife, Marylou.

As this homicide detective’s murder investigation becomes increasingly tied to events beyond Dallas, readers become engrossed in a blend of murder mystery and dangerous men who understand that success is not risk free. Detective Ortiz’s relentless pursuit of a passenger list oddity could bring down long-held, lucrative plans.

Henry’s plan to foist a forgery charge on Guy Wheeless, the deceased’s uncle and the main suspect who appears to have an irrefutable alibi, sets the stage for a dangerous game. The action moves from Henry and his wife and Amsterdam experiences to perilous moves certain to set the art world on fire.

Perhaps one reason why The Forger’s Forgery is a complex mystery and yet realistic, is that it’s based on the true story of master forger Han van Meegeren, who forged the works of some Dutch masters in the 1930s and ’40s in a notorious crime that was clever, unprecedented, and difficult to solve.

Clay G. Small is masterful at his depiction of Dutch culture and peoples, the art world, and the forgers who influence its development, making their illicit money on creations that are masterfully created in their own right.

The characterization is well-developed and three-dimensional. Many of the characters move between good and questionable or bad acts, making choices that demonstrate they are not good and bad guys, but human beings who act and react in surprising ways.

As the mystery evolves, the art worlds of both Amsterdam and Texas come to life as environments influenced by forgery events that connect disparate lives and peoples, changing and challenging the art world.

Mystery readers who enjoy art history will relish the exceptional presence of both in The Forger’s Forgery. 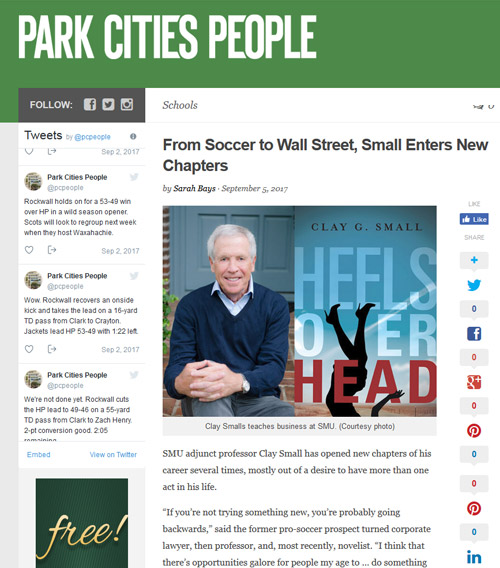 SMU adjunct professor Clay Small has opened new chapters of his career several times, mostly out of a desire to have more than one act in his life. “If you’re not trying something new, you’re probably going backwards,” said the former pro-soccer prospect turned corporate lawyer, then professor, and, most recently, novelist. “I think that there’s opportunities galore for people my age to … do something that helps others and helps [them].”… Continue reading 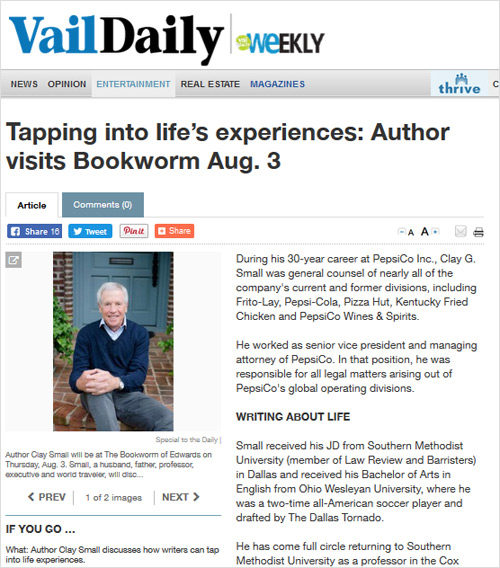 During his 30-year career at PepsiCo Inc., Clay G. Small was general counsel of nearly all of the company’s current and former divisions, including Frito-Lay, Pepsi-Cola, Pizza Hut, Kentucky Fried Chicken and PepsiCo Wines & Spirits. He worked as senior vice president and managing attorney… Continue reading

Executive Henry is happily entrenched in a high-stakes job cutting global deals when his position vanishes, leaving him struggling not just for work, but for the source of his identity.

What could this conundrum – and the specter of his beautiful wife’s affair, which simultaneously attacks his personal world – have to do with murder and revenge? Plenty, as Henry is about to discover when his attempt at rebuilding his world with a new job only sends it on a dangerous downward spiral.

Heels Over Head is about law gone awry, an entrenched, comfortable life tumbled into a strange new world, and a man’s painful reminder that reality is at times on a collision course with illusion. In a war between the sexes, and between business and legal issues, who will be the winner?

And what do tattoos have to do with Henry’s entanglements?

Henry’s life isn’t the only one being turned upside down, and Clay G. Small deftly creates a supporting cast of characters that hold their own places in a decades-long cycle of revenge and complicated relationships. Under another hand, it would have proved all too easy for Henry’s story to become overly complicated; but each character plays a key role in changing Henry’s life and all dovetail nicely as an atmosphere of intrigue and danger builds to a satisfying crescendo that takes readers far from what initially appears to be a simple story of unemployment and re-creating one’s identity.

The result is a fast-paced, involving read that moves through many changes as protagonist Henry faces some of the biggest choices of his life, only to find that many them have come full circle from the past. Without spilling beans, suffice it to say that even with Henry’s actions, all is not as it seems – and the door is left well open for further insights even as events lead to many surprises and an unexpected outcome for all.